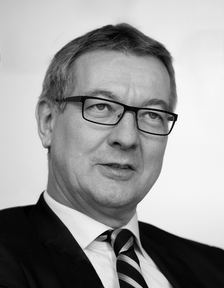 
After graduation in Aeronautical and Aerospace Technology Dieter Wegener worked as scientist at „Deutsches Zentrum für Luft- und Raumfahrt (DLR)“. After four years as consultant for McKinsey he joined Siemens in 1996 as Head of Gasturbine Engineering at “Power Generation”.
During his career within Siemens he had different responsibilities: personal Assistant for an Executive Board Member, Chief Technology Officer (CTO) for Division “Industry Solutions” and Vice President “Advanced Technologies & Standards (ATS)” for Industry Sector.
Today he is Head of External Cooperation at Siemens Corporate Technology. Additionally he is

Since 2008 Dieter Wegener has been teaching “Innovation Management and Sustainability” in the role of an adjunct Professor at DTU in Copenhagen.
Since 2017 he is additionally teaching as a “Lehrbeauftragter” at TIME-Institute with focus on “Innovation Management, Digitalization, Industrie 4.0 and Sustainability”.
During his lectures he is supporting the hypothesis that “Digitalization / Industrie 4.0 could become a Driver for Sustainability in the industrial arena”.